Oh, there we go! Shot 60 rounds through it while in MT last month to make sure it wouldn’t immediately vomit its bolt carrier out the back or something.  Worked like a charm, now I need to get that red dot and zero everything in.

Now that this is all double plus ungood, I would like to remind you that none of it would be in my hands now if it weren’t for your idiotic dying on a hill for Bloomberg. That’s right, i had no intention of buying an AR-15, or 30 new evil, evil above-15-round magazines, or hundreds of more rounds of “assault weapon grade” ammo, or a bunch of locking storage that is now festooned with deliberately misleading stickers.

I hope you all collectively piss yourselves. Maybe there’d be enough liquid, then, to water your lawns so you would stop bitching about our water, too.

Just wondering if anyone out there has any ideas on drop-in modular-railed (i.e., I could leave most if not all of them off, the goal here is lightweight) mid length handguards for an AR.

It’s amazing to me that this is my first AR-15 and I already had a enough spare parts to complete it.  Next I want a tiny tiny red dot of some sort (Fastfire or DeltaPoint, maybe, not sure I can convince my Scottish ancestors to let me to shell out the 600+ bucks for Aimpoint et al.) and a different handguard (those Apex ones, no rails except where you want them, perhaps?), a sling, perhaps with mounts, and probably a flashlight of some sort.  LEGO guns, it’s ridiculous.  Oh, and according to my totally accurate and trustworthy bathroom scale method, it weighs in at (with no magazine) 4.8 pounds.

As an aside, Bravo Company throws in so much swag when you order something from them, it’s kinda cool and ridiculous at the same time.  Five or six posters, six stickers, a very nice baseball hat, a small bottle of EWL Slip 2000 lubricant (which I’ve been wanting to try out anyways, so that’s even better) and a couple of Tacticool-Blackticool DVD’s.  Neat!

And hey, FCCTCNSABAFTEIOU and sometimes Y, this message was brought to you by my hard earned cash–perhaps you should try that method sometime? 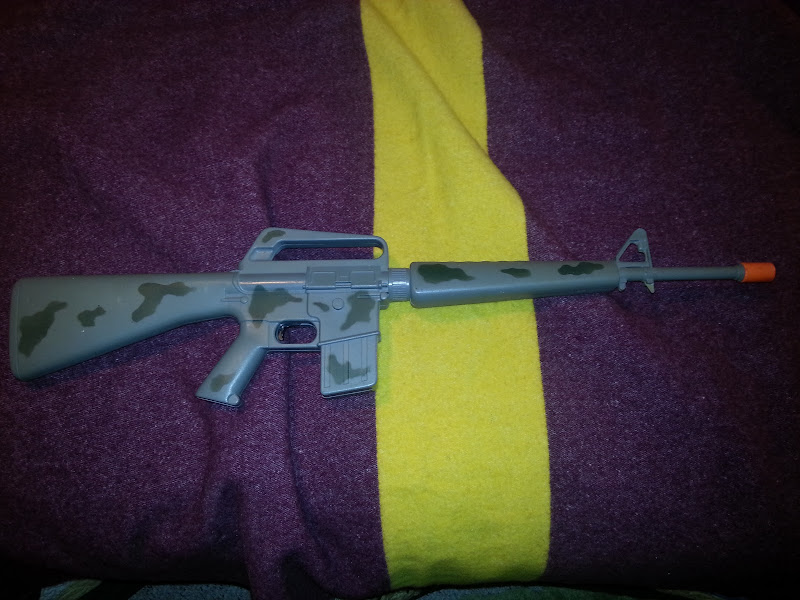 Ope, wait, no that’s not it. That’s an old toy I dragged out of the closet when I was cleaning the upstairs last weekend.

This is the new one: 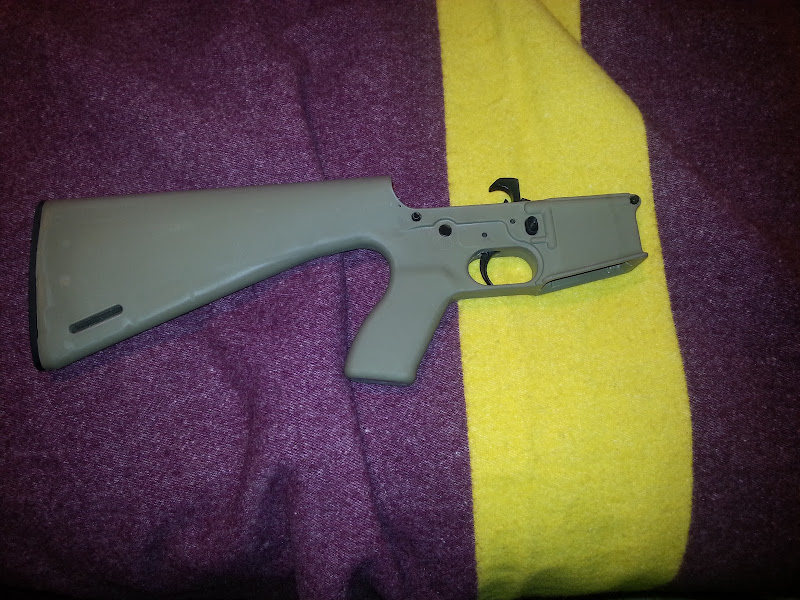 Kinda hard to tell them apart, both are just colored plastic with some clicky bits inside.

Butch convinced me that a CAV-15 polymer lower was the way to go, and since I got a load of Boulder Airlift Magpul mags, it seemed sad that I had nothing for them to go into. This way I have something grandfathered in, and can order all the other parts I want off the internet (assuming they ever come back into stock). Planning on making a nice little lightweight jobby eventually.

It’s a great thing, a polymer lower–it pisses off pretty much everyone on a gun forum!