I had been seeing “Sherlock Holmes: The Montana Chronicles,” by “Dr. John H Watson, M.D.,” “edited by” John Fitzpatrick, around the shops of Montana since the summer, and in early December I bought it just to see what it was like.  The premise is that Sherlock Holmes and Watson came to MT to help out Marcus Daly
(one of the Copper Kings of Butte’s mining haydays) and stay for a short time to solve a few other mysteries.  Dr. Watson left the manuscript at the Anaconda library, where it was lost in a safe until recently, when John Fitzpatrick edits and publishes it.

It was written in the same style as all of the other Sherlock Holmes stories, and is highly entertaining and readable, especially if you have been in the areas described in the stories.  Also in the book are occasional pictures from the early 1900’s showing the places as they would have been when Dr. Watson was “writing” the stories. I give it 10 pipes out of 10. 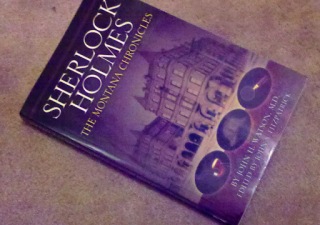 The Adventures of Sherlock Holmes started out my Books of 2010, and this modern incarnation appears to be the one to close it.  I should go back and count how many books I really read, as that was the whole point of this exercise when I started it, but right now I am lazy.  Maybe later.  What will I read in 2011?  Will I finally get back to Vlad Taltos, as I have been meaning to do for two years now?  Will I find new entirely series (series’s? series’?  What’s the plural of that word, anyway?) to distract me?  Stay tuned to find out!

2 responses to “Books of 2010: Sherlock Holmes: The Montana Chronicles”